Spanning less than a decade, the king’s reign was defined by its free spirit and its rejection of the restraint of the Victorians, and this was reflected in the evolution of Edwardian furniture. The heavy, dark and imposing Victorian furniture cluttering rooms were gone and replaced with lighter colours and materials.

As homes became smaller, so did Edwardian furniture. Mahogany was still the main timber used, and this period saw a revival of inlays that had been abandoned by the Victorians. Carved legs came back into fashion, as well as satinwood banding, Adams inlaid swags and brass mounts.

The Edwardian period is known for reviving popular styles from the past and mixing them with new styles, which made reproductions very common. Unfortunately, this can also make it difficult to identify Edwardian furniture, as many integrate elements from different historical periods and countries.

A revolution was also slowly making its way through society: electric lighting. Although only found in the grander homes under Edward VII, it led to a new world of possibilities in terms of interior design. Fabric lampshades with frills and tassels or glass lampshades like Tiffany lamps, which would have been unthinkable with candles, made their apparition.

Furniture from the 1890s are also classified as “Edwardian furniture”, although Queen Victoria was the reigning Monarch at that time.

The trend to manufacture furniture that had started under Queen Victoria continued to grow, with the difference that machines were now more efficient and able to produce better quality items. As such, Edwardian furniture are very much a bridge era between skilled but expensive craftsmanship and mass production.
It is to be noted that Edwardian furniture are, technically, the last pieces that can be called antiques, as they are just about older than a hundred years.

Not unlike Victorian furniture, Edwardian furniture was an eclectic mix. Antiques and antique collection were becoming popular and a period of revivals ensued, with craftsmen replicating furniture from the Tudor, Renaissance and Georgian eras into which were integrated modern styles. However, it would be incorrect to assume that the Edwardians were fixated on the past, they embraced as readily Avant-guard furniture movements such as Art Nouveau and Art Deco.

The influence of Arts and Crafts on Edwardian furniture design

Although the Arts and Crafts Movement started under Queen Victoria, it still played an important role in the design of Edwardian furniture and would remain influential until the 1930s when it was supplanted by Modernism.

Originally started by textile designer William Morris as a reaction to furniture produced by machines, which he felt were of inferior quality, this style favoured themes from folk sources and the Middle Ages, and Arts and Crafts Edwardian furniture were, of course, made by hand by traditional craftsmen. It was also influenced by the Japanese art, which had been discovered in the middle of the 19th century by a captivated Europe, and the socialist movement stemming from Industrialisation.

Despite the general trend for Edwardian furniture to be smaller, fireplaces in reception rooms were often very imposing, with large hearths and carved mantelpieces. They also usually had splayed sides with decorative tiles and iron or copper hoods, whereas smaller versions were generally found in bedrooms.

Although Willian Morris died before the Edwardian period, his legacy continued to inspire Arts and Crafts furniture makers. Other notable craftsmen of the time were William de Morgan and Richard Shaw.

While the Arts and Crafts movement gave birth to Art Nouveau –known as Jugendstil in Germany and Stile Liberty in Italy– its style and aesthetics were very different. It no long looked towards the past for inspiration, but to its surroundings, and was highly sought-after by the Edwardian upper classes.

Gaudí’s buildings such as the world-famous Sagrada Familia in Barcelona were representative of the decorative style of Art Nouveau, characterised by flowing lines and curves. It abandoned the fussiness of Victorian design in favour of organic forms inspired by nature, with floral and animal motifs prominent. Upholstery was used less than it had been, and, likewise, followed a lighter design in colours as well as motifs, with a predilection for birds, feathers, dragonflies and flowers.

Art Nouveau Edwardian furniture also made use of new materials. Foreign timbers such as bamboo were featured, as well as silver, glass and semi-precious stones. Wicker was also introduced during that period and can often be seen in couches and wing-back chairs.

Among the designers of the time, a few names stand out from the crowd, such as Charles Rennie Mackintosh. His Edwardian furniture was celebrated internationally for their striking and unconventional designs – which were not always understood during his time. Although Rennie’s design philosophy was one of ‘no design’, some common features can be found throughout his Edwardian furniture: the elongated lines of flowing feminine forms, influenced by the Pre-Raphaelites, as well as leaf and flower motifs. His pieces of furniture can sometimes look overly worked on their own but they look fabulous in the right context.

Louis Comfort Tiffany is another well-known name, even nowadays, and his lamps and glass objects are still highly coveted.

Against this background of design innovations, the Edwardian society also re-discovered the Queen Anne style, and reproductions being now easier thanks to machinery, this revival gained in popularity in the later part of Edward VII’s reign. It was echoed by a revival in Baroque style in architecture, marking a change from the eclectic styles that had been in favours for decades.

In terms of colour schemes, the Edwardians completely turned away from heavy, strong colours, and adopted light and fresh pastel tones for every element of their décor, from furniture to soft furnishings and wall papers. With long, flowing lines and curves, the patterns had an undeniable feminine feel, further enhanced by the predominance of floral and animal themes. However, this isn’t to say that Edwardians homes would shy away from making a bold statement, and dark greens and blues could be found in living-rooms, although they were lightened up with cream walls.

Bamboo and wicker were introduced in this period and remained popular with furniture designers as they were perfect to achieve the delicate and lighter nature of Edwardian furniture. They have stood the test of time and you can still find fine example today. They also have the great advantage that they are easy to spruce up with paint – applied with a spray, not a paint brush.

Likewise, fabrics were chosen for their ability to enhance a light, airy decorating style, and chintz and damask in light colours were the norm.

If you are looking for Edwardian furniture, don’t hesitate to contact us for advice. 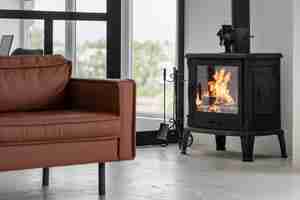 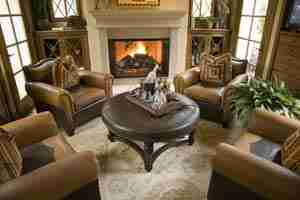 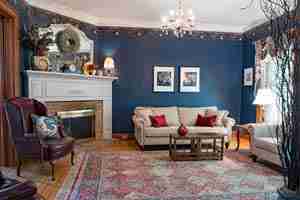 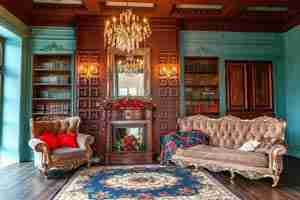 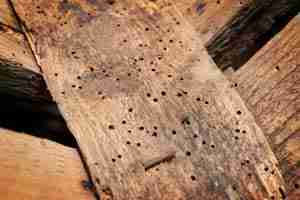